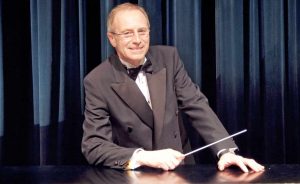 Martin Cook originally trained at the Royal Northern College of Music, Manchester, where he studied piano and piano accompaniment.  After graduating he emigrated to Canada where he worked, for four years as a school music specialist in Newfoundland. It was in this role that he was first noticed as a choral conductor and as a result went on to study choral conducting at Boston University. After returning to the UK he developed his career in teaching, his last post being as Director of Music at The Blue Coat School in Liverpool, but he maintained an active musical career beyond the classroom, both as a pianist and a conductor. His high school choirs toured regularly throughout Europe, performing in Venice, Vienna, Maastricht, Prague, Salzburg and Santander.  For ten years he conducted the Chester Music Society Junior Choir and under his direction, they twice reached the semi-finals in “The Sainsbury’s Choir of the Year Competition” and also received awards at the Montreux International Choral Festival and The Riva del Garda International Choral Festival.  From 1997 – 2009 Martin was Musical Director of Sandbach Voices. Under his direction, they performed most of the major choral works.

In 2009 Martin was offered an Assistantship at the University of Nebraska-Lincoln, USA where he completed a doctoral degree in conducting, conducted the “All Collegiate Choir” and taught conducting to undergraduates. His dissertation: “A Survey of The Sacred Choral and Orchestral works of Sir Henry Walford Davies (1869-1941) probably makes him the world expert on Walford Davies. Before returning the UK Martin worked in Cedar Rapids, Iowa as Director of Music Ministries at Christ Episcopal Church.  He is now working as a freelance conductor and teacher of Piano, Organ and Voice. He presently conducts Shrewsbury Choral Society, his own Chamber choir M-16 and is a Director of Music at St Philip’s Church, Kelsall and organist at St Peter’s church Delamere

Martin also sits on the ABCD (Association of British Choral Conductors) and acts as tutor of choral conducting.